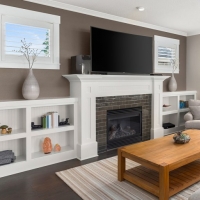 Design Through the Decades: Living Rooms

Ah, the living room. The kitchen is for cooking, the dining room for eating, and the bedroom for sleeping. They’re all succinct and practical. But the living room, it’s all about living!

And since everyone has their own ideas on life, it’s not surprising this is a room open to a wide swath of design interpretations. Over the decades though, certain trends come to the fore, so despite the person-to-person variations that inevitably occur, there are recognizable patterns tracking the cultural evolution of the home’s common space.

At the turn of the 20th century, the parlour was the precursor to what we know today as the living room. It was the place where guests were entertained and it was even the final resting place for some, before funeral homes took over the task.

However, like so much of modern culture, the contemporary evolution of the living room begins in the post World War II era, and with the arrival of television.

While television predated the war, its popularity exploded in the 1950s. While found in about 9% of North American homes at the start of the decade, 80% of households had one by the start of the ‘60s, and colour TV emerged to fuel the boom.

The bulky wooden cabinets required space as well as seating. It’s here the once-formal and sparsely used parlour evolved into the ancestor of the home theatre. Line of sight was an issue with these early versions, so competition began for the one spot on the sofa where the picture was clear.

As TV screens slowly grew wider, so did seating options. Sofas of the 1950s were traditional, holdovers from the pre-war era. But as the space age emerged, so did Mid-Century Modern. The style trend turned out to be a chintz killer. Low, solid colour sofas became the fashion, with tastes leaning toward earth tones. Leather came into vogue and the sectional sofa concept of designer Harvey Probber was now accessible to quickly expanding suburbia. The finest of Mid-Century Modern design still retains a strong appeal for many today.

Psychedelia took hold in the hippie era and translated for public consumption in the 1970s. Pop and Op art lent themselves to the wallpaper fad that broke up the idea of monochrome walls. Paste and paper took over from brushes and rollers and suddenly, walls had patterns. Need a change? Throw up another layer! It was the Disco Era, so metallic and velvet flocked offerings can be, in hindsight, forgiven. The ‘70s also saw a surge of shag carpet throughout homes in every room—for better or for worse.

The living room began to have an identity crisis in the Miami Vice era. Wallpaper gave way to pastel paints and those leather sofas were no longer limited to earth tones. On a more fundamental level, the concept of the living room expanded from singular to plural. The study or den became home to many a portable TV. When some in the family watched Knight Rider rather than Dallas, the demand for viewing alternatives grew, and the precursor of the man cave emerged.

Just as home styles have changed with the times, the fundamental living room concept continued to evolve. The two-storey home began to dominate the single family scene, and with expanded floor space and finished basements, multiple common living spaces, a trend that started in the ‘60s and ‘70s, became commonplace by the 1990s. As any Winnipeg native can tell you, even the garage can claim part-time existence as a living room. TVs in every bedroom further diluted the need for a single, shared family space for entertainment. VCRs became entrenched and the “main” TV became larger and with better image quality.

The 2000s saw the liberation of floor space as flat screen televisions completed the move from cabinet to TV stand to wall. The home theatre blossomed as multimedia hit the mainstream. The trend continues with smart TVs processing cable, satellite, DVDs, and streamed digital content. What used to be a room that sometimes contains a TV is now a room dedicated to binge-watching the latest series.

Now, as ever over the past 70 years, the living room in all its forms seems centered around a glowing screen.